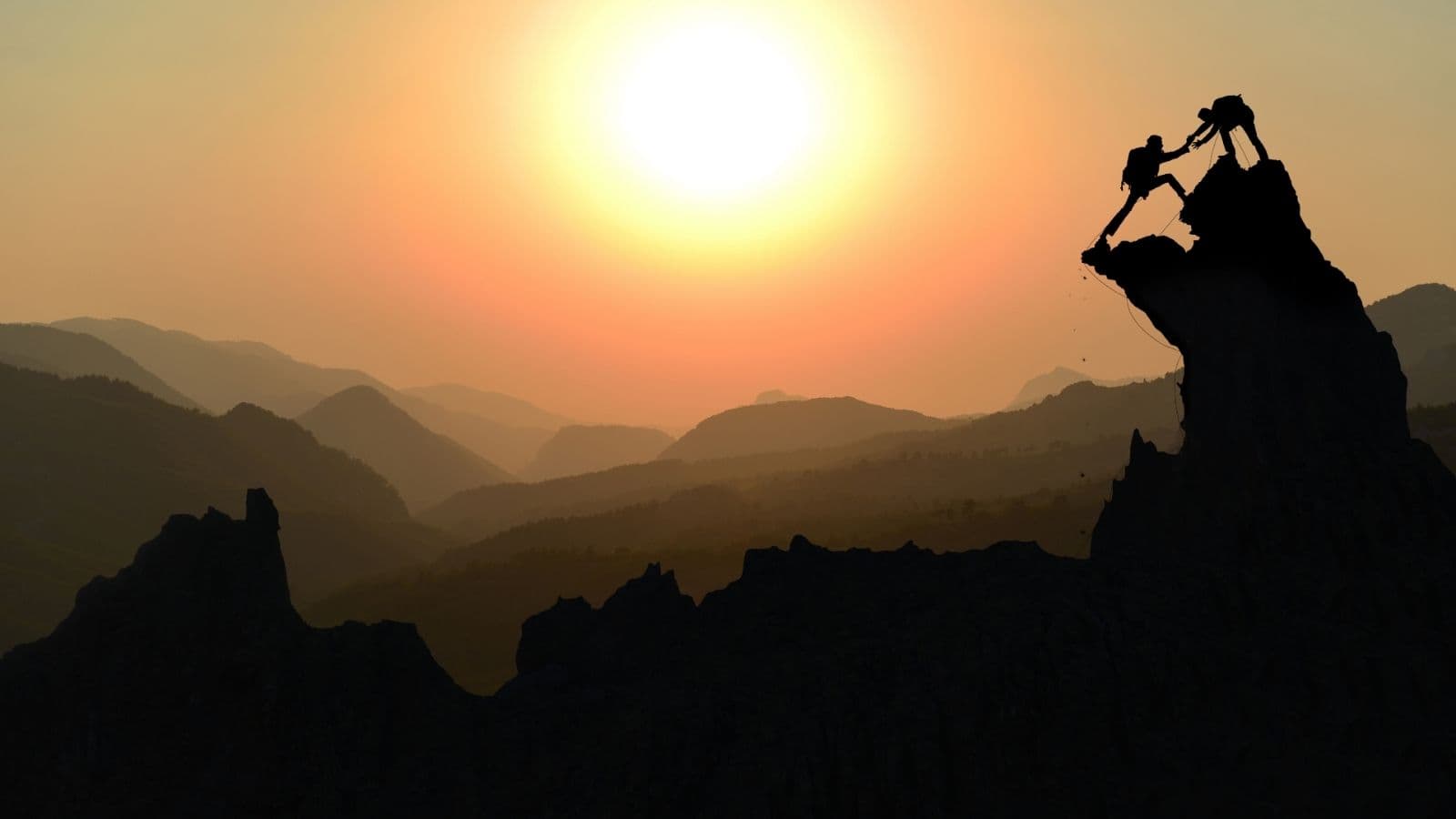 Yes, Together we can …

Homo homini lupus est a Latin phrase from Plautus meaning “man is a wolf for man”. In these troubled and troubling times, it would be fair to believe that this phrase is still relevant today. Those who consider that human beings are only manipulators, calculators and egotists will have a little difficulty in conceiving, in these conditions, the greatness of soul and the goodness of those who prove to us how much we are all perfectible … there is good in all of us.

2019 has started well and started strong. The overall mood is tense. Our daily life has never been so gloomy: The vertiginous fall of our national currency. Unprecedented deterioration in our purchasing power. Leveling down. Recurrent strikes by public school teachers accompanied by a total incomprehension, not to say absolute disunity of parents whose children are taken hostage … by grown-up children.
Let’s face it, “leadership by example” leaves much to be desired in this country. Many august leaders are worth much and very little. This observation is sad and the words to say it are severe. However, concrete and unique solutions exist. These solutions are found in… us. Each of us. There are two clashing realities today. The first is imposed on us by people motivated by the love of power. The second is offered to us by people motivated by the power of love.

In eight years, this hypothesis has taken shape before our eyes and has shaped our daily lives. The theory originated in the 1930s in the United States and was developed during the 80-90s. It establishes a causal relationship between the deterioration of public space and a more general dilapidation of human situations resulting from it. If we make a human community live in a dilapidated space, the general behavior will tend towards disorder.

However, if there is something that has characterized our public space, it is the visible decay of public space. A pile of waste, great environmental insalubrity, a notorious absence of law enforcement agencies, which can only be identified during rush hours … And while municipal responsibility is undeniable, we should also look at our individual responsibilities. What can I do to make things better? From experience, it is enough to initiate a positive action to inspire those around you to do the same.

A dynamic is very often instantly put in place. Do not wait for the passage of municipal officials to clean up your surroundings. Pick up the little bits of paper and other packaging that adorn our streets and alleys. I particularly draw the attention of those who clean the courtyards of houses with plenty of water. I will not talk about this very little eco-responsible cleaning method. In a country threatened by increasing water stress, using large swipes of clean water is almost criminal.

Let’s talk about the lack of hygiene that comes with dirty water. Often stagnant, they end up in the streets and in front of house fences. This gesture was forgivable in the days of our ancestors. In their day, the streets were not even paved. Today, such a move makes no sense. Yet it is constantly reproduced. Without bothering to pick up the waste and the sheep that accompany these waters that are supposed to purify our interiors. In fact, you just have to start small. The sum of small actions will eventually induce the changes one would like to see happen.

Tunisians are generous. It is undeniable and it is indeed their finest quality. Yet generosity alone is not enough. We share our resources, we provide food, we financially support someone in need. But we do it with a certain emotional reserve. You give your money without problem, but you don’t give enough of yourself. Few people give their time. You don’t give your smile, your affection, your human warmth, your courtesy, your kindness.

To remedy this, one should not only multiply the good deeds (as much as possible) but also practice gratitude. It is, remember, one of the keys to happiness, even when working in hostile contexts. We stop comparing ourselves to others. We reduce our aggressiveness because we feel lucky, we develop our self-esteem and empathy, etc. If you had to start somewhere, it is with gratitude that it should be done.

EMPATHY, AN INNATE TRAIT TO ENCOURAGE

Scientific findings have proven that humans are an empathetic species. The team of professor of human physiology, Giacomo Rizzolatti, revealed in 1996 in Parma that “mirror neurons” activate in the same way when people feel an emotion and when they see someone feeling it. Thus, we can perceive the emotions of others as if they were our own.

Psychological researchers Felix Warneken and Michael Tomasello have studied the spontaneous kindness of 18-month-old children. They could interrupt their games, to spontaneously help an adult who asked them, for example, to move something. Magnetic resonance imaging has shown us that cooperative gestures activate the same areas of pleasure in the brain as when we eat a treat. Competition stimulates those of disgust.

According to an American study *, people who volunteer have better scores on their feelings of happiness, self-esteem and quality of life than average. It also seems that these people, generally less depressed, are less affected by Alzheimer’s disease, live longer and are in better health. So be good, it makes you feel good!

SOLIDARITY IS THE ANSWER

It suffices to remember this extraordinary outpouring of solidarity following the fall of the Ben Ali regime in Tunisia. The caravans that regularly crisscross the territory to go to disadvantaged regions, or the support given to Libyan refugees during the war. The feat achieved by the Maram Solidarity association which succeeded in collecting in 2017 the sum of 1,257,882 TD for the construction of a special unit, within the bone marrow transplant center of Tunis for cancerous children, or even more recently the aid given by the Tunisians to the inhabitants of the regions affected by the last floods, but also the inauguration of the cultural center of arts and crafts of Jbel Semmama by the Rambourg foundation in the governorate of Kasserine.

The examples are numerous and emanate both from individual initiatives and actions organized within associations, collectives or foundations. Support networks abound not only here, but also everywhere else in the world (in the United States there are more than 500,000). Human beings are inclined to collaborate with others, when given the opportunity, for the pleasure of contributing to the general interest **. On the web, donation sites are proliferating and people donate items they no longer use to complete strangers (co-recyclage.com). Initiatives advocating mutual aid and benevolence are increasing.

Seventeen countries around the world therefore organize Kindness Day every year. Not to mention those famous free hug sessions or all the sequences entitled random acts of kindness, which could be translated as “random acts of kindness”. Models of cooperation are multiplying online. Thousands of internet users share their knowledge on Wikipedia. Teachers provide academic support to the youngest, without being paid. They create pages, present their lessons, state exercises and provide their answers. High school students preparing for their baccalaureate exams can only attest to this.

Studies have shown that online interactions, far from creating a withdrawal into oneself, on the contrary encourage greater sociability in everyday life.

Simple consumption does not constitute a social value for them. Rather, it is responsible and civic behavior. The culture of the web, developed by people who give, exchange and collaborate, has accustomed them to the notions of sharing and generosity. One of the direct consequences of this phenomenon is the habit of being free. This leads them to favor barter and recycling over purchasing. Evolving in a context of crisis, Generation G is attentive to prices, looking for rapid services and prefers socially responsible brands. Their commitment to a cause is a trigger for purchasing: for competing products at equivalent prices, the committed brand is preferred.

Today we are faced with a combination of unique circumstances. This situation is not exceptional. All human generations have had to confront one day or another with a similar problem: how do we live in hostile conditions? Can you imagine if our hunter-gatherer ancestors waited for large carnivores to tire of the taste of human flesh to ensure their survival, instead of using ingenuity to adapt to the situation and overcome difficulties?

You see, there is always a way out. It is enough not to be a fervent supporter of fatality. Decide to take matters into your own hands and take action.